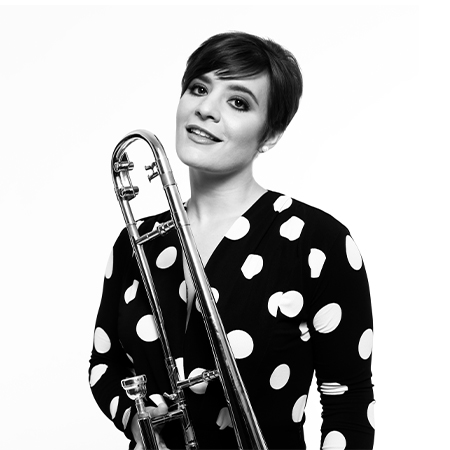 “Aubrey Logan, best known for her unique swing-tinged, trombone-laced pop performances with the viral sensation Postmodern Jukebox, steps into the spotlight as a songwriter with the sensational cross-genre debut “Impossible.”

As the winner of the Montreux Jazz Festival Competition and someone who’s performed with Pharrell Williams, Josh Groban and Dave Koz, Aubrey has successfully broken down genre barriers with a sound that combines jazz vocals with R&B, neo-soul, pop, and a touch of rock.

Seventeen Magazine simply says, “we can’t stop listening to how good she sounds” while Luxuria Lifestyle UK says she’s the type of artist you want to listen to in the car on a seriously loud volume, while belting out unattainable notes.”

Released in 2017, her debut album “Impossible” reached #2 on the iTunes and #13 on the Billboard Jazz album charts; and saw Aubrey perform for Jools Holland and sold out shows in North America, Europe and Russia.

Aubrey’s on a mission to put the trombone into pop music as often as she can, especially with her new Rath trombone.