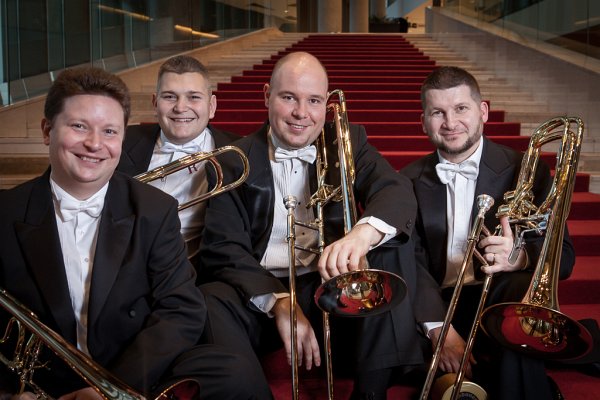 In a year of anniversaries Rath Trombones is thrilled to be celebrating 15 years of the Corpus Quartet joining the four musicians for a special concert in their home town of Budapest.
Having been their sponsors for a decade we have watched with interest as the team have developed as musicians and won accolades across Europe, Asia and North America.
András Sütő, Péter Pálinkás, Róbert Káip and Galla Ákos, came together from distinguished careers as senior members of international orchestras. At the same time two, Peter and Robert are senior music educators at leading European universities sharing their passion for the trombone with the next generation.
From the beginning it was clear they would be hugely successful. They entered a brass competition in Germany just three months after their formation and won the judges special prize. More success followed two years later when they won the 32nd International Trombone Festival Quartet section establishing themselves on the international circuit.
This lead to demands for them to tour Europe and beyond to Asia and the United States, which they accompanied with the release of three cds which have sold out.
But there is more to the quartet than trombones and music and in 2012 they decided to establish the First Hungarian Trombone Concert for trombone students to inspire the next generation. It is hoped that it will be an annual feature and eventually extend to school students to safeguard the next generation trombonists.
This summer they have held a series of concerts in Budapest to mark their 15th anniversary and finished it by taking part in the annual International Tenor and Brass Trombone Competition. The celebrations will culminate in a concert on Saturday September 24 and we’ll be there.
We’re proud to have been part of the journey and look forward to more years of Corpus Quartet success.