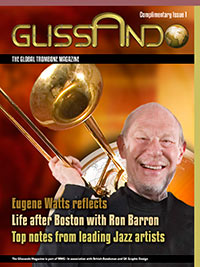 Brett Baker has launched a new online magazine for all trombonists, called “Glissando”. Issue one is free and features an interview with Mick Rath. It’s available now on the Glissando website.

I’d like to tell you about an exciting new project that we are about to introduce to the world – Glissando, a brand new online magazine that will be global in its reach and will touch upon subjects that are important and relevant to today’s trombone players. Whilst including articles on the world’s leading trombone players, we will also aim to include contributions from some of the areas of our art that get less coverage in other publications.

This first issue of Glissando will feature interviews with and contributions from leading figures in the trombone world like Eugene Watts (Canada), Ron Barron (USA), Martin McCain (USA), Richard Walker (England), Garry Reed (England), Martin Wilson (Northern Ireland), Mick Rath (England), Bill Broughton (Australia) and Steven Legge (England), as well as a report from the ETW in West Virginia (USA) and the latest news from around the globe.

This first issue of the magazine is free of change and is merely a flavour of what is to come. I hope you like our offering, but feel free to contact us with suggestions of topics that you would like to be discussed in future editions.

Click on this link to view your complimentary free copy of ‘Glissando’ via the website and, if you like it, please consider subscribing to receive issue 2, available in June. In the meantime, enjoy Glissando!