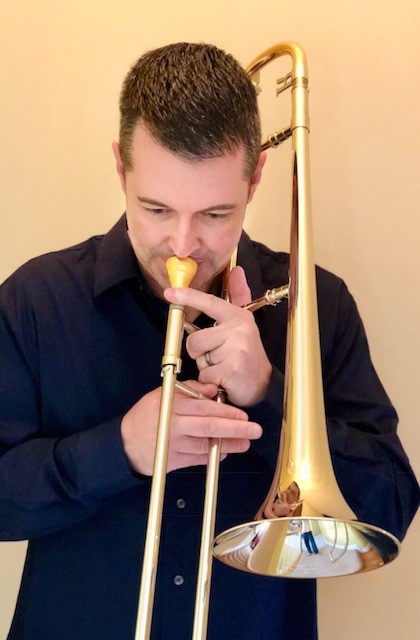 Jeff Martin is a trombonist originally from Newton, Kansas. He holds a Bachelor of Music in Jazz Performance from the University of North Texas.  While at UNT, he performed with the Grammy nominated One O’Clock Lab Band from 1994-1996, touring across the United States, Japan and Hong Kong, and can be heard on four CD’s.

An accomplished writer and arranger, his arrangements have been recorded and performed by the Airmen of Note, UNT One O’Clock Lab Band, the University of the Arts, the University of Southern Illinois, and numerous high schools and colleges throughout the country. Since 1996, Jeff Martin has played 2nd Trombone with the Airmen of Note, The United States Air Force Band, Washington, D.C.

Jeff has performed with the Dallas Jazz Orchestra, Pete Peterson’s Collection, the Ben Patterson Jazz Orchestra, and the Alan Baylock Jazz Orchestra.  He has also performed with David Liebman, Joe Lovano,Herbie Hancock, Dave Brubeck, Randy Brecker, Slide Hampton, Gerry Mulligan, Kenny Barron, Clark Terry, Peter Erskine, and Jerry Bergonzi, among others.  His soloing and big band arrangements are featured on 15 Airmen of Note recordings, including “A Holiday Note from Home,” “Out in Front,” “Compositions,” “Tiempo Latino” and “Veterans of Jazz”.

“The Rath R10 is by FAR the best trombone I’ve ever played in my life.  I’ve played a lot of great trombones, from classics to modern horns, and all of them have been a compromise in some way.  ALL of them.  This particular R10 doesn’t compromise at all.  It allows me to execute what’s in my mind with lightning quickness and precision.  It’s a willing partner that invites me to create music, and always works with me, never against me.  I’ve never played a horn that responds so perfectly at every dynamic range I throw at it, from pianissimo to fortissimo.  And I never have to worry about response, it’s always there.  My big concern, as with any horn, is, can I keep up with the volume of the band?  We’re talking walls of sound here.  Many horns that are great for jazz are simply unusable because of this.  Well, all I need to do is lean on the nickel R10 a little bit, and it’s like a twin turbo in an Aston Martin..  You can light it up with ease with reserves in the tank.  This horn makes me want to practice, to get better, and it is simply a joy and inspiration to play.  This particular Rath R10 is truly my personal “holy grail” of trombones.  It’s simply stunning to look at and make music on, and I look forward to performing on it every day”