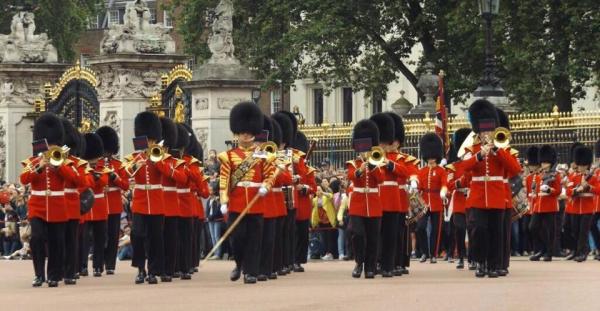 Mick Rath and his wife Nikki received a major accolade on behalf of the Rath brand recently, when they were invited to a garden party at Buckingham Palace on 24 May 2016.  The invitation had been prompted after HRH The Princess Royal visited the Honley factory last year and saw first-hand how each custom trombone is made from start to finish.  The invitation was a huge surprise but also a great honour for Nikki, Mick and the whole Rath team.

The party, at which Her Majesty The Queen, the Duke of Edinburgh and the Duke and Duchess of Cambridge welcomed all the guests, was even more special for Mick and Nikki because throughout the afternoon tea the 7000 guests could hear first-hand the result of our hard work. They were serenaded by the Band of The Irish Guards, including a trombone section playing Rath instruments. Mick was photographed with their trombonists, and Mick and Nikki were also fortunate to be invited to Horse Guards’ Parade the following day to watch a rehearsal of the Trooping of the Colour.