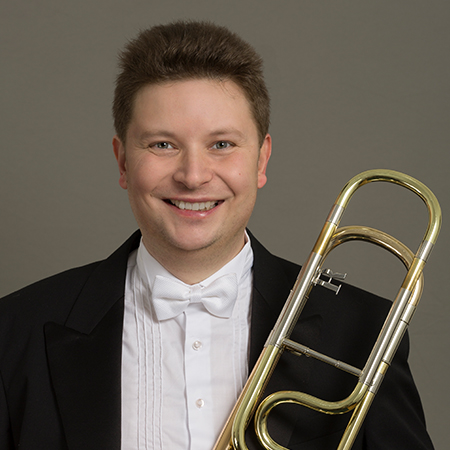 Robert was born in 1977 in Budapest, Hungary. He started his musical studies in 1984, playing piano. In 1989 he started learning to play trombone. He graduated at the Béla Bartók High School for Music. After that he studied at the Franz Liszt Music Academy, he obtained his diploma as trombone player and teacher in 2000, his professor was Gustav Hona.

Since 1997 he is a solo trombonist of Budapest Symphony Orchestra.

He participated several times in the Hungarian-Austrian Ensemble Pro Brass with whom he made several recordings.

In 2002 he got a state award „Franz Liszt”, as a member of the Ewald Brass Quintet.

He has played the première of numerous Hungarian contemporary works for trombone.

A part from Budapest Symphony Orchestra, he is also a member of the  Danubia Symphony Orchestra since its foundation 12 years ago, and he often collaborates with other symphony orchestras in Europe and with Orchestra Ensemble Kanazawa in Japan.