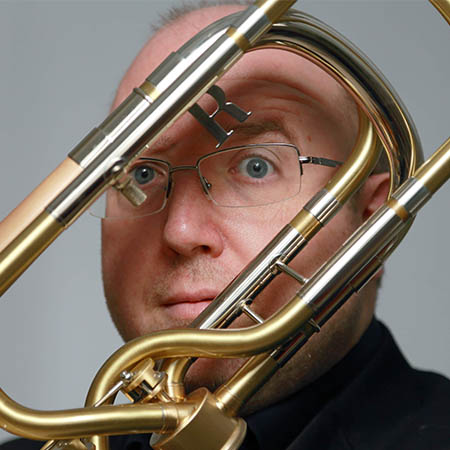 Michael Rath Trombones are very pleased to announce that Steve Clarke has joined the team.

Steve grew up in Northampton as part of a musical family in the Salvation Army. He started to play percussion and euphonium at an early age and joined the County Youth brass band. After lessons with his incredible teacher, Rachel Coles, Steve was awarded the Malcom Tyler award in 1995. A year later he joined the Band of the Irish Guards as principle euphonium and toured the globe playing solos and duets at some of the best concert halls the world has to offer. After an accident and a few back operations in 2006 he dipped his toe into the dark world of the bass trombone and held the bass trombone chair not only in the Irish Guards but the Army big band, Guards big band and the phenomenal ten piece brass group, Guards Brass. After leaving the Guards in 2018, Steve has been in demand as a freelance bass trombonist which sees him regularly on stage with The World Famous Elvis Tour, The Glenn Miller Orchestra, Chris Dean’s Syd Laurence Orchestra and the Denmark Street big band to name a few. He is awful at golf but enjoys the cigar and the laugh on the way round!