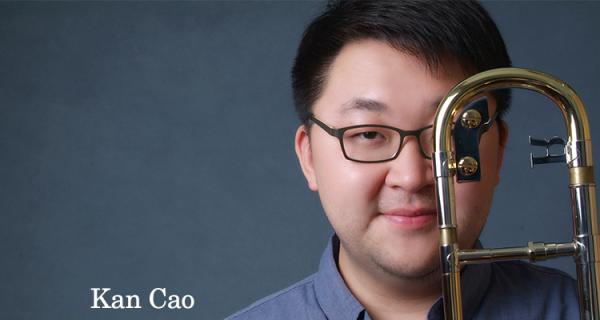 Kan Cao was born and raised in Shanghai, China. At the age of nine, he began musical studies with his trombone teacher, Da Li Li. As a high school student, he was a soloist with the Shanghai Student Orchestra and went on to continue his musical training at the Shanghai Conservatory of Music, where he received his bachelor’s degree in music performance in 2012.

Kan Cao is an active soloist, jazz trombonist, and classical trombonist. He was a trombone leader in the jazz bands, such as Shanghai Conservatory of Music Jazz band and JZ all-star big band, which is the best big band in China.

Kan Cao has graduated in 2015 from the University of Central Oklahoma (UCO) In Oklahoma, where he majors in Jazz Study. Now he is the jazz trombone teacher in shanghai conservatory of music,