Next generation Rath hits the high notes on BBC Radio 2 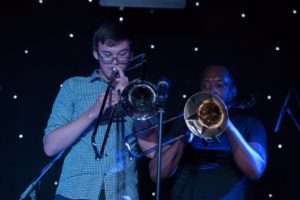 THE next generation of Rath trombonists stole the limelight on BBC Radio 2’s Jeremy Vine show recently when Oli played live into the programme.
Listened to by millions he was asked to be the musical accompaniment when Mick spoke to Jeremy about how BREXIT had impacted on manufacturing.
Of course in the case of Rath Trombones it has made little difference and we don’t expect it to. The most important thing for our customers and business is the quality of raw materials and the standard of skilled engineers who can create the sound that our musicians know and rely on.
Mick started Rath Trombones because he felt that he could make a top quality trombone and after 20 successful years and growing list of international celebrity endorsements he had a point. Rath Trombones are played around the globe by musicians starting out on their careers or at the very peak and Mick has been privileged to listen to Rath trombones being played by professionals such as the Count Basie orchestra in the Blue Note club in Tokyo.
The future of Rath Trombones is the next generation of musicians such as Oli whose talent has to be nurtured. He demonstrated his technical ability at the recent 20th anniversary birthday bash when he played alongside Dennis Rollins at the improvisation sessions. He’s also had years experience playing live in his own bands.
Being asked to play last minute on live radio is different because you know that there will be millions listening particularly to the Jeremy Vine show which is one of the most popular.
Oli took to the mic with confidence and drew acclaim from Jeremy Vine who demonstrated his own knowledge of trombones referring to the slider.
To listen to the piece visit http://www.bbc.co.uk/programmes/p046mvj0